Do you like to travel? If you could go anywhere in the world, where would you choose? Why there?

I have friends who love the open road. Others look forward to an occasional cruise or a February flight to Florida where it's warm and sunny. One couple went to Australia to hike and breathe in the beauty of the Southern Hemisphere. And then there are missionaries and others who find their place to serve anywhere from Europe to Asia to South America and beyond.


Unlike these brave souls, I'm afraid I'm a little like Beatrice Curtis Brown's character, Jonathan Bing, who when he was invited to visit the king, sent back this reply:

If you please will excuse me, I won't come to tea;


For home's the best place for all people like me!


Lately I've been thinking about why "all people like me" might be more inclined to choose home if given the choice of whether to go or stay. For me? Having survived a car crash, the ever-present possibility seems to simmer on the back burner of my mind. On top of that, probably my introvert-ish nature craves the quiet, the predictable, the stable routines. It's a place I know in a world of unknowns. It represents family gatherings beside a blazing fire, writers' meetings around my dining room table, and hot cups of tea served with love to all who cross the threshold. 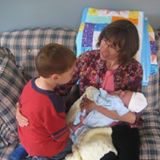 I go to visit my children in Lancaster where I play with two special grandboys and where the clip-clop of Amish buggies always stirs up a cloud of curiosity. My youngest daughter and I make our yearly pilgrimage to Lake Michigan to visit with my late husband's family, relishing in the sand, the wind, the waves . . . and the sense of belonging that comes with intentional gatherings and conversation. Last summer, we drove over 1000 miles to visit perspective colleges in the Midwest. On our last trip, we traipsed through no less than five airports coming and going.

And while waiting at the gate, I ran across these words penned by Elisabeth Elliot: "Traveling nowadays means what it has always meant; facing risks."* Then she cited the writings of an ancient apostle who shared his travel log:


In my travels I have been in constant danger from rivers and floods, from bandits, from my own countrymen . . . I have faced danger in city streets, danger in the desert, danger on the high seas, . . . I have known exhaustion, pain, long vigils, hunger and thirst, doing without meals, cold and lack of clothing.**

Talk about risk! These words put my travel frustrations in perspective.

So, maybe "all people like me" aren't as adventurous as others, not as apt to take risks. But often we go. We go because of the people we love. We go to be together.


Are you more apt to stay or go? Why?


Perhaps all the exhausting inconveniences held a little bright spot in an odd sort of way.

After a full day of waiting and watching our departure time bump in minute and hour increments from 12:40 p.m. to 10:30 p.m., our flight to Philadelphia canceled altogether. Weather issues on the East Coast, they said. That left my daughter and me standing in line at Gate 8 in Fort Wayne, IN. "I'm sorry," the ticket agent told us as he punched his keyboard. "I can't get you out of Ft. Wayne until the day after tomorrow. The only other option is to leave out of Indianapolis tomorrow at 12:22 p.m., fly to Chicago, and then onto Scranton.

Indianapolis? Two and a half hours away? How would we get there? What good is a Tracfone at a time like this? My heart began to pound.

Another ticket agent who happened to be standing there began to scroll on her phone. “Here’s an option you might want to try.” She turned her screen in my direction so I could jot the number down.

Hoosier Shuttle. Maybe I could make this work.

We boarded the shuttle at 5:20 and sat on the front bench seat behind the driver and a gentleman passenger. Conversation began to flow in the predawn darkness. As the miles clicked by, I found myself listening to the man in the front passenger seat. With charcoal skin and a dark mustache, he wore a flat cap and glasses. Stories rolled off his tongue like thick molasses. One of six children, he was born in Mississippi. His dad picked cotton for two cents a pound. His parents didn’t have much of an opportunity to learn to read and write. Leftover prejudices saw to it that black ignorance remained the norm. “So they couldn’t better themselves,” he said. He told us his family had no running water in the house until he was fifteen or sixteen.

“How did you end up in Wisconsin?” the driver asked, referring to an earlier part of the conversation.

“The good jobs were in the north,” our new friend simply stated. “Many of my high school friends went to college to become teachers. Me? I went straight to work—made more money than them, too. I’m 62 now. . . . I’ve done okay." Later, the father of seven girls and one boy mused, “This is the best country in the world. You can better yourself if ya have a mind to.”

Topics jumped from the beauty and roar of Niagara Falls to how the Amish live to politics. “Ya know, the world is coming to an end.” He leaned up in his seat, pointing his long brown finger to make his point. “If the wrong leaders get into office and if they push the red buttons. Well . . . that’ll be it.”

“Where are you headed?” I asked as we neared the terminal.

He laughed. “There’s nothin’ at them exits all away across Pennsylvania.”

I watched him enter the double doors, somehow feeling lighter having listened to his story, the story of a man so unlike me—a white woman from Buffalo and Pennsylvania who always took running water for granted and who’s never been to Mississippi or Wisconsin. I took a little of the conversation with me, and as we wait at Gate B7, I’m grateful for that little bright spot tucked in a couple of days of travel frustration.

And now, I just want to go home!


NOTE: Thanking God that we made it home safe and sound, even if it was twenty-four hours later than expected.