So, who's the main person who feeds the people at your house? The one who cooks, packs lunches, and makes sure everyone is fed and nourished? In my home, it's me. I enjoy it most of the time.

Do you sometimes resent all those hours in the kitchen because of the more worthwhile items on your TO DO list?  At times, I do. Especially this season of the year. Recently, I heard a statement that has revolutionized the way I think about the time I spend in the kitchen.


"Jesus took time out of His sermon to feed people." 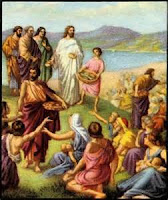 I found the story in all four gospels. People had come from far and near to hear Jesus teach. When "the day was already far gone," Jesus sent the disciples among the people to search for food "that these may eat." All they could find was a little boy's lunch, consisting of five barley loaves and two small fish. In the end, Jesus fed 5000 men plus women and children from this little lunch, lovingly prepared by an unnamed mother that morning. Several ideas stand out in bold as I read this story.

All worthwhile activities, wouldn't you agree? So much more that just getting the crowd fed. Translated into our century: a simple menu of plentiful, nutrient-dense food. A table of seated family members and guests. The giving of thanks. A setting for conversation, for sharing the wonder of daily miracles, for telling stories that reflect God's faithfulness. A feeling of warmth and belonging. It doesn't always happen this way, I know. Yet even though mealtimes have their challenges, perhaps these observations are worth our consideration. Perhaps there's another way to view our work in the kitchen.

The next time we're tempted to sigh over the endless cooking and baking responsibilities and all that goes with it, or even feeding a baby every three hours around the clock, let's remember how Jesus took time out of His important kingdom service to feed people. There's a whole lot of worthwhile-ness in that! 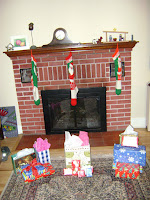